I’ve recently developed a really embarrassing habit.
I have no idea why I have started doing this, or why I can’t seem to stop doing this, but I do know that I must be stopped because it’s embarrassing my children
I can’t stop giving people The Thumb’s Up. And I’m not talking about it in a joking manner. I’m talking about using it in actual, real life situations as a valid form of communication.
I’ve already busted out The Thumb twice today.
While at Starbucks, the barista asked me if it was ok that she put whipped cream on Gabby’s hot chocolate. Instead of saying “Yes, that’s fine!” I did this…

Then, while at my Weight Watchers meeting (More on THAT in just a bit) I threw a Big Thumbs Up combined with a wink to the lady who asked if I was happy with the program.
Maybe it’s not as big of a deal as I’m making it out to be, but in my experience, only Assholes use The Thumb’s Up gesture in real life conversations.
Well, assholes and The Fonz.
I suppose there are times in life when using a “thumb’s up” is necessary and/or acceptable. For instance, your husband asks you to help him back the moving truck into the yard by letting him know if he’s going to hit the tree. You stand behind the truck and when you realize he’s going to clear the tree just fine, you throw him a big ol’ thumb’s up to let him know that it’s all good and he can back that shit right up.
But when the Dish Network Technician tells you he’s all finished installing your service, TOTALLY NOT COOL to flip him the thumb while saying something totally not cool like “Right on, man..
I suppose that I have bigger things to be concerned with, like, you know, finding a place to live and um, losing the 30 pounds that I have put back on.
Of course, the finding a place to live is much more important than losing weight and so I’m spending much more time on Craigslist than I am on Weight Watchers, BUT, I am spending time (and money!) on Weight Watchers because over the past few months, I’ve let my weight once again spiral out of control and have put 32 pounds of the 70 that I had lost back on.
(Yes! I am spending my husband’s money on Weight Watchers! That makes you angry, doesn’t it? You’re outraged, aren’t you? Have you created an anonymous account to tell me to “get a job” yet? HAVE YOU? Well, don’t waste your time, because, I got a job. And? I may be getting another job that is actually kind of a dream job, so stop making your head explode by worrying about my life, ok? It’s all good. Alllllllll gooooooood.)
Long story short, I stopped taking care of myself. I stopped making healthy food choices, I stopped working out (except for an Aerobic Dance Class here and there), I pretty much stopped caring. Life got overwhelming and I caved to the pressure by taking it out on my body.
But, it wasn’t all sad and upsetting as one may think. Sure, I hated that I wasn’t fitting in my clothes, and I hated that I didn’t have to put my head down to make a double chin, but I also was enjoying the HELL out of not obsessing over what foods I was eating and going to the gym.
It was actually kind of scary just how little I cared.
I was tired of working so hard to lose weight, I was tired of watching every damn thing that I put in my mouth, I was tired of feeling guilty for having a cookie.
And I won’t lie, it was kind of fun turning into “Doug Heffernan” for a few months. (Yes, I actually rubbed my fat stomach and said “This is for the kids” on more than one occasion.) But, the truth is that being unhealthy is NOT funny. I may be all “ha! ha! none of my clothes fit me! and ha! ha! Look at my belly slap me in the face when I jump!” But deep down, I want to cry.
Because I don’t feel good.
When I finally decided that I needed to get serious about my health again, which was just last week, I decided that Weight Watchers was the way to go.
Hi, my name is Y and I am a have joined and quit and rejoined Weight Watchers at least 40 times.
I’m happy with my choice to once again count points and obsess over everything that I put into my mouth. I only (YES, I SAID ONLY) lost 3.6 pounds in my first week and that pisses me off (and the first person who says “at least you didn’t GAIN weight” gets my thumb up their ass, unless you like that sort of thing, then it’ll be my foot in your teeth.) but it just motivates me to try harder next week.
(And by “try harder” I mean “actually eat vegetables and not use all of my points on coffee and string cheese.”)
I’ve thought about whether I should document my progress/failures/but mostly progress (positive thinking!) in pictures again, but I’ve not made up my mind yet. I am not sure if that was actually more harmful than helpful for my progress. I do know that my pictures and my candor on my battle with this thing called The Fat has inspired and encouraged complete strangers on the internet to lose weight, so that’s one reason to do it, *cue song by Chicago* but I also know that there are some raging, throbbing assholes on the internet who have nothing better to do with their time then create flickr accounts to leave me asshole comments. In the end, I realize that no one really cares what I do, but that it’s a personal decision I have to make.
And I think that I should do it, but let’s be honest, it’s going to be really embarrassing to post a picture with the numbers “203” in the title after having posted a picture like this. (oh, how I miss you oh 170ish waist)
But hey, at least I’m being honest. And at least I’m trying to do something about it and I think that deserves one big old Fonzarelli Thumbs Up. 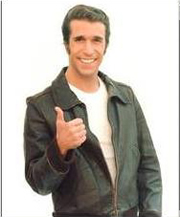