Last year we spent our wedding anniversary in Vegas. We had such an amazing time, I knew that I wanted to do it again this year. Except this year was out 20th, so I wanted it to be a bit more extravagant. For us, “extravagant” basically means “willing to spend more than $58 for a room via Hotwire.”
So, last month I spent days searching various websites looking for a good deal on a nice room with a jacuzzi.
Out of all of the hotels and all of the deals that I found, I ended up booking a Spa Suite at the Monte Carlo.
You may be all “the Monte Carlo? BUT WHY?”
You see, last month I stayed there and I had a pleasant experience. The hotel was clean, our room was nice, the staff was friendly and I loved the location. (I’m easy to please. Obvs.)
I was in love with The Room I Booked. I imagined myself sitting in the spa, with a glass of wine in one hand and my husband’s…hand in the other, admiring the beautiful view and flashing lights. I imagined other things that I won’t write here because certain members of my family read this blog now and they’re kind of sensitive about things that involve me talking about sex in any way, shape or form. I swear, I mention my Blow Job Punch Card Reward System ONE TIME.
I guess what I’m trying to say is that I had high hopes for this room, for the spa, for my vagina.
The day after Thanksgiving was Our Big Day. The drive to Vegas started off rough– nothing like dead stopped traffic to test our marriage! But, traffic didn’t last for long and after I apologized for blaming the traffic on my husband, we had a wonderful time! We smiled a lot and talked about how much fun we were going to have (and when I say “fun” I mean, YOU KNOW WHAT, MY FAMILY.)
After we checked into the hotel, we did that really fast walk that people who want to hurry up and get naked so that they can “eat at the buffet all night long” do. We opened the door to our room and, well, it was nice. But the window was FILTHY and the view was not all that sweet and I could feel The Disappointment rising from within my soul and into my eyeballs but I was NOT going to cry about a dirty window with a not so pretty view! Instead, I asked my husband to call and ask if we could get a room with a nicer view.
The person who answered our call was very nice and offered us another room. We picked up our suitcases and headed down to the 19th floor. We walked in and it looked exactly the same as the other room! Except that we could actually see out of the window and the view was pretty sweet. But then I walked over to the tub and that is when I saw it. 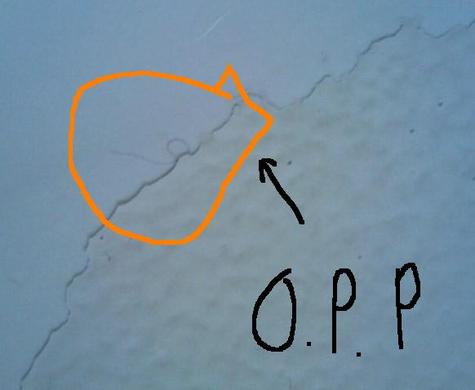 Other People’s Pubes.
I kind of freaked out.
“LOOK! PUBES! THERE ARE PUBES IN THE SPA! PUUUUUUUUUUUUUBES.”
PigHunter rushed over to have a look.
He saw the pubes (that wasn’t the only one.) I started to cry.
“There is a pube in our spa! I can’t go in there. I will never be able to go in there!”
He picked up the phone and actually said the words “there is a pubic hair in our spa. My wife is crying. This is our 20th anniversary. Can we get a room with a nice view and a clean spa that does not have pubic hair, please?”
The person on the other end of the phone apologized. Then, he offered us a new room and a free buffet for the two of us. I didn’t care about free food. I just wanted a Pube Free Spa.
We picked up our things for the 2nd time and headed to our 3rd room.
The first thing I did upon entering room #3 was run to the spa to check for OPP. I was relieved to see that the spa was clean and Pube Free. I took a look around and everything seemed to be fine. So, I put all of my things down, took off my shoes and went to sit down on the sofa.
Except that just as I was about to sit, I noticed a rather large stain. I remained calm while I pointed it out to my husband.
“That’s not blood, is it?” I asked.
“I hope not.” He replied.
I hope not was not the answer I wanted to hear. I wanted him to say “hell no that’s not blood! It’s chocolate!”
Within the next 5 minutes, we discovered the following:
A half empty bottle of Coke. Something sticky all over the nightstand. Stains on my pillow case.
PigHunter made another call to the front desk. They sent someone up to inspect the room. They cleaned up the room while we stood there and watched (aaaaawkward.) The hotel gave us a $50 food and drink comp for the inconvenience.
Once the drama was behind us, we were able to relax and have a great night. We enjoyed our free buffet. Played some slots. Went back up to the room to chill for a bit, fell asleep, woke up and laughed about how old we are, freshened up and went out for some drinking and dancing and some laughing and some kissing and some arguing and some more dancing and some walking through the hotel lobby angrily while I said things like “I DON’T WANT TO TALK TO YOU RIGHT NOW!” and then some apologizing and some cuddling and finally some [edited for family] bible study time.
Four hours later I wake up to the sound of water dripping. I hope it’s just a dream because am so tired from all of the dancing. It’s not a dream. The sound of water is real, but where the eff is it coming from? I get up and look to see if our shower was leaking. Nope. I check the toilet. Nope. So, I go back to sleep.
A few minutes later, PIgHunter wakes up.
“I hear water running.” He says. “Do you hear it?”
We look around the room. PigHunter goes “Oh my God.” I turn around and see this: 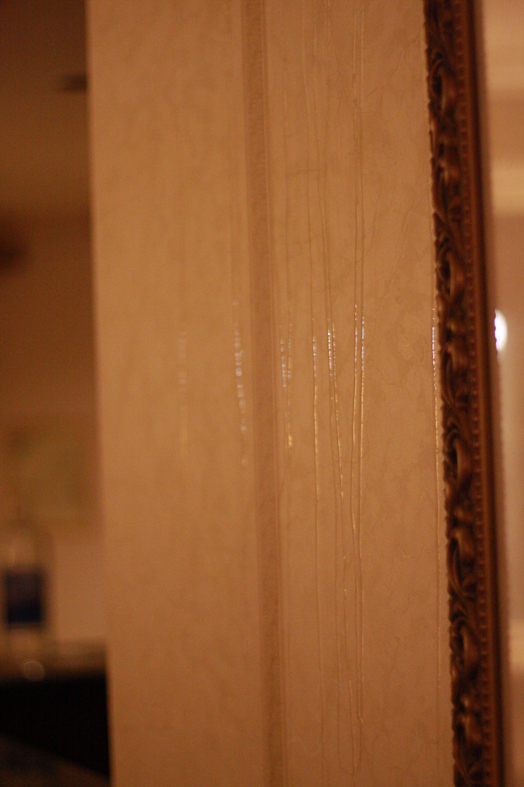 Water, pouring from the ceiling down the wall next to our bed.
What! The! Hell!
I call the front desk to let them know that “Hi! There is water pouring into our room from the ceiling!” PigHunter tries to keep me calm while I go on and on about the possibility of the ceiling crashing in on us and five minutes later, there’s another person in our room, inspecting things while we stand around and watch.
HAPPY ANNIVERSARY TO US!
The water situation is fixed, PigHunter leaves to go get us breakfast. While he’s gone, hotel security comes up to take pictures. He asks if any of our personal property was damaged, I was like “do hopes and dreams count as personal property because if so, YES! PERSONAL PROPERTY HAS BEEN DAMAGED!”
Two minutes after Security Guy leaves, there is a knock on the door. There is a dude standing there with a stack of towels. I was confused. “Ohh, did you come to clean up the water?” I ask. He was confused. “someone called up for towels.” Hmmm. Maybe PigHunter called up for the towels? I don’t know, but I want this guy to leave because I’m sick of Random Hotel Staff all up in my room so I take the towels and set them on the counter.
When PigHunter came back with breakfast, he noticed the towels on the counter.
I told him that some dude dropped them off. “I thought maybe you had called and asked for towels?”
My husband, who is one of the most level headed, kind, calm people on the face of the earth, lost his shit.
He started ranting and raving. “Oh, do they expect US to clean up the mess? Do they think we’re going to spend our anniversary trip drying up all of this water? OH HELL NO THIS IS NOT RIGHT I’LL BE RIGHT BACK AAHHHHHHHHH!
He had every right to be angry. The water leak? Not their fault. But you know, it happened and they didn’t call to check on us or offer to move us to a room that did not have soaking wet carpet. Instead, they sent up a stack of towels so we could clean up the mess ourselves? Um, no.
The hotel offered us another room (#4!) and a $100 food/drink comp.
So, we had to pack up our things again and move to another effing room.
When we made it into our 4th! room (which, by the way, was pretty much perfect) I plopped my over fed ass on the bed and sighed the loudest sigh I’ve ever sighed in my entire life time. This was not the get away I had hoped for. This was nothing like I had imagined it would be. It was stressful and annoying and I wanted a do-over. I allowed myself to sulk for a bit (why do these things always happen to meeee? Why can’t things ever go right for me?) then I sucked it up and vowed to make the very most of the little time we had left (to use the mofo spa) together. We finally did make it into the spa (to pray, of course, my family!) late Saturday night. We turned the water on, got in (in bathing suits!) poured the bubbles and settled in (on opposite sides of the spa!) I poured some bubbles in and pushed the button to turn on the thing that makes the water all bubbly? The jets? The power nozzles? THE WHATEVER THE EFF THEY’RE CALLED. Anyway, I pushed the on button.
Nothing.
I pushed again.
Nothing.
I pushed it again, held it down for a few seconds.
Nothing.
I could feel the anger rising within my soul.
“It’s not working!” I said, in a voice that sounded kind of satanic because… ANGER! RAGE! ANOTHER THING IS WRONG!
Tony jumped to his feet and leaped out of the tub.
“I am going to call them right now!” He shouted, all angrily. “This is not okay! IT IS NOT OKAY!”
And then I remember reading somewhere that in order for the spa jets (?) to work, the tub had to be filled to a certain point. So I told my naked (kidding, family!) husband to get back in and wait for the tub to fill up a bit and we’d try again.
Sure enough, it worked.
After we stopped laughing, we um, you know, “relaxed” until we couldn’t “relax anymore.”
In the end, I didn’t have the Anniversary Getaway I had planned or dreamed of, but we made the best out of the situation and managed to have a Few Moments of Awesome together. So, it’s all good.