Last week I was talking on the phone with Jenny about the Nintendo Wii Fit. Naturally, the conversation turned to “embarrassing fitness purchases.”
One would think that having purchased TWO products by Richards Simmons– “Sweating to the Oldies” (with the Order in the Next 5 Minutes Bonus: RESISTANCE BANDS!) AND “Deal a Meal”– was as bad as it gets, but one would be wrong in thinking that.
I was all “Dude… I once bought a BodyBlade.” And then I sent her the link to an old post I had written about it.

Originally posted 4.24.04
I am always looking for the easy way out of things. I’m not proud of it, but it’s the damn truth. This character flaw of mine makes me a total sucker for infomercial products.
Imagine my excitement when I heard these words late one night while feeling sad about having gained weight WHILE eating chips and dip.
“Get The Body You’ve Always Wanted In Just 6 Minutes Of daily Workout!”
I put down the chips and dip, got out a pen and paper and grabbed the cordless phone.
I saw the device. 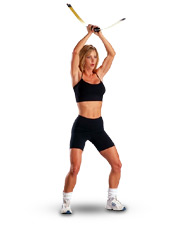 “This can’t be for real.” I thought. “That looks wayyyyy too easy. It can’t be true!” I continued to watch. They showed this hot chick with this piece of rubber in her hand, bouncing it up and down. It was working every muscle in her body. They even went into sssssllllooowww mmmmootttttiioooonnn so you could see how every muscle was being worked!
“I CAN DO THAT! I MUST HAVE THAT!”
I ordered it for the great price of JUST $100! (Or! Just 5 payments of $19.99! Plus tax and shipping!)
That’s right, a hundred bucks, but hey! Look at that chick! a body like that is worth $100.00 and in only SIX MINUTES A DAY.
I got it a few days later and opened the box up, all excited because in just SIX MINUTES A DAY for the next few weeks, I was going to look like THIS!
When the package arrived, I opened the box full of hope. All I had to do was flap that thing up and down–side to side and I would have the body of my dreams! But then, I actually held that piece of rubber in my hands and attempted to do it just like the hot chicks and the buff dudes in the commercial.
Um…that shit was hard. And not hard in the way that a good workout should be. It wasn’t as simple and moving that piece of rubber back and forth, there were actual things involved that required a bit of skill. Things like “rhythm” and “not feeling like an asshole while working up to said rhythm because ha ha, am I really holding a giant piece of rubber in my hands in the hopes of looking look like this?”
I would alternate between fits of laughter (HAHAHAHA LOOK AT ME TRYING TO SHAKE A GIANT RUBBER STICK!), shame (I’M WORKING OUT WITH A GIANT RUBBER STICK.) and anger (DID I REALLY JUST SPENT ONE HUNDRED DOLLARS ON THIS GIANT RUBBER STICK?)
Needless to say, it didn’t work and that box is collecting dust in the garage along with my hopes and dreams of perfectly chiseled abs in just six minutes a day!!!

We laughed and laughed, but then she was all “Duuuuuuude. I’ve got you beat. I once bought The iGallop!”
I had no idea what the iGallop was, so she sent me a link to a video on YouTube.

Did you watch? Are you weeping with laughter? For a minute, I thought she was right and she really was The Winner in the contest of bad fitness purchases, but then I looked up “body blade” and I don’t know, man, I think it’s a tie.

Can you do the “Reverse Warrior” with the iGallop? I DON’T THINK THAT YOU CAN.
(Ok. I’ll concede. She totally wins. The only person who could ever beat her is the person who actually paid money for the Oxycise videos.)
I took quite a bit of abuse at the hands of friends and family for purchasing the Body Blade. It was the butt of many jokes at holiday dinners and birthday parties.
“Hey, Y– how are those workouts coming along? I thought you’d be cut by now?”
“Hey, Y– you should give me $100 to beat you with that thing for wasting money on it!”
I got even one Christmas when we had one of those “White Elephant” gift exchange at my in-laws house. I wrapped it up all nice and pretty and dropped just enough hints to make the men think it was a fishing pole. Everyone one of the men got a number, they would take away the box that they THOUGHT contained a fishing pole in it away from whoever had it. My brother in law ended up with it at the end and was all “HA HA! I WON!” to the other men. Then, he opened it up and saw that it was THE BODY BLADE. He was so pissed. “I THOUGHT IT WAS A FISHING POLE! I SHOULD HAVE KNOWN! I DON’T WANT THIS! YOU CAN KEEP IT!”
“Oh hell no!” I said “It’s yours now!”
“But I don’t want it.”
“But you have to take it!”
“Fine.” He said, all angrily. He left shortly after the gift exchange and I can’t tell you how relieved I felt as I watched him walk out of the house with that box in his hand. Iwas so relieved to be rid of that thing I had tried to sell it at yard sales, I even put a “FOR FREE” sign on it once (NO LIE!) and no one would take it. BUT, it wasn’t really gone! Because my Brother in Law didn’t actually take it home with him. Instead, he left the box on the roof of our van.
ASSHOLE! (And I say Asshole with LOVE)
So, unless PigHunter threw it away when we moved, that Rubber Fucker is still collecting dust somewhere in my garage.
The reason that I am telling you about this is because, duuuuuuudes. Jenny is GIVING AWAY A WII CONSOLE AND a copy of Wii Fit!!! All you have to do to be entered to win is to tell her YOUR embarrassing fitness purchase story (either in her comments, which, by the way, ARE HILARIOUS. You must read them! or on your own blog with a link back to her post.) What are you waiting for.. go! Tell her! NOW!