We moved into our new home in July. I had money saved to do some decorating (new accent furniture, pretty new things to hang on the wall, etc) but I lost my job just a few weeks after moving in, so that money went to pay bills instead.

Looking at the blanks walls can be a bit of a downer.  This house is lovely and I do love it so, however, I’d love to be able to buy things to make it look like our home.  Yesterday, I decided to try a project I’ve seen on Pinterest to add a little bit of joy to the walls in our bathroom. The project looked simple (and inexpensive!) enough to try.

The only materials needed besides the prints were 2 blank canvases (I purchased black ones so  I wouldn’t have to paint them), Mod Podge and a paint brush. That was it! 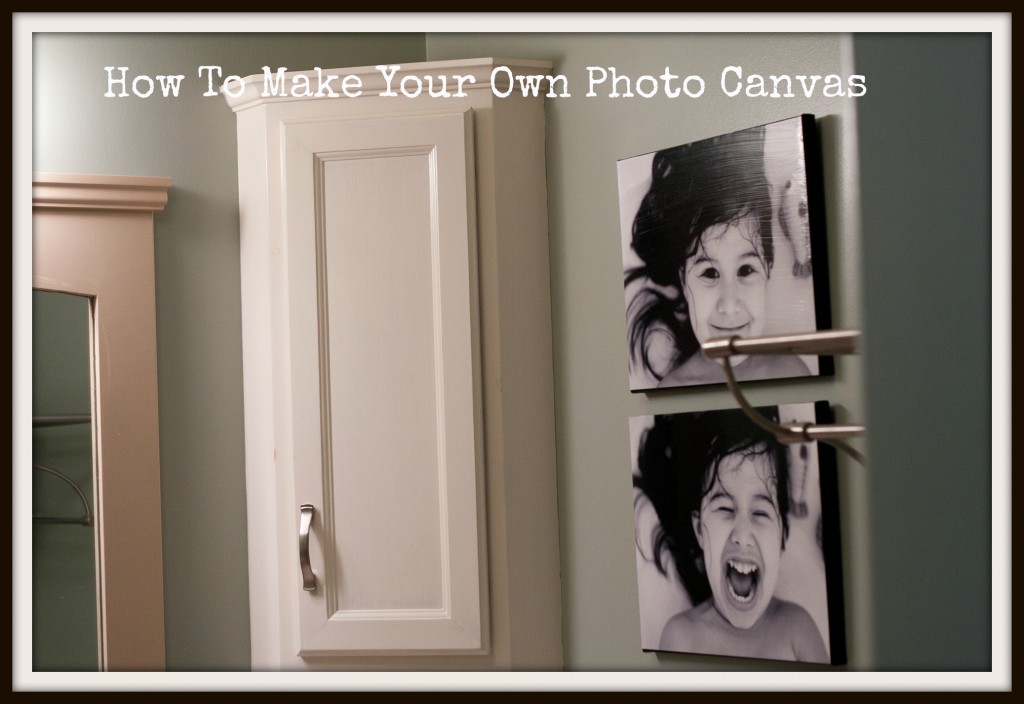 You can find the instructions that I used HERE. Basically, you put Mod Podge on the canvas, you then place the photo on top, get rid of any air bubbles and put a coat or two of Mod Podge on top of the print. If you have a white canvas, you may want to paint the edges black (again, see the instructions on the link I posted above) but since I used a black canvas, I didn’t have to do that step. I may try that next time to see if I like the painted edges better. 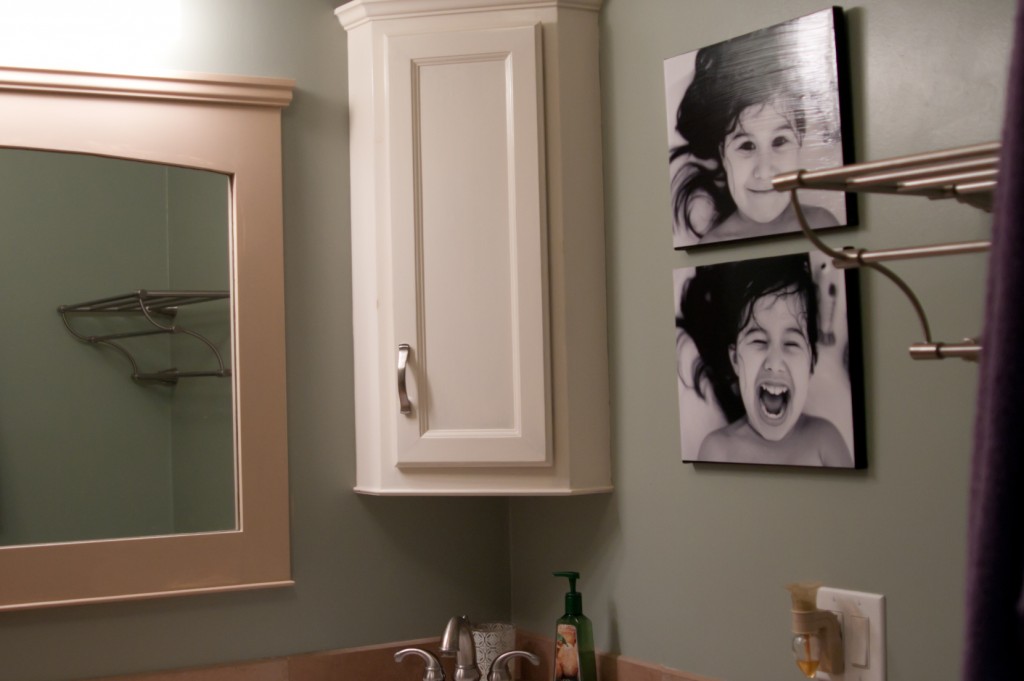 The only issue I have is the lines from the dried Mod Podge. I wish I had been more careful to make sure they were a bit neater (if that makes sense?) but other than that, I absolutely LOVE the way they turned out and can’t wait to make some more for other rooms in the house.

It’s totally possible I’m going to turn into one of those “Decorate Your House on a Super Tight Budget” people.  Prepare yourselves.

I’ve been down for the past few days. And I’ll admit, I’ve been feeling a bit sorry for myself.  Last week was rough for many reasons. And to add to the frustration, on Wednesday I injured my knee pretty badly. I’m currently unable to walk without crutches (or jumping/limping around the house) and on a variety of medications/pain killers. The doctor said it will be at least 4-6 weeks before I can even think about working out again.

I feel defeated and I can’t seem to find Joy in the days.

Last night  I limped into my daughter’s room to put something away. I noticed an open envelope sitting on her dresser. I opened it up and what I found inside made me cry. 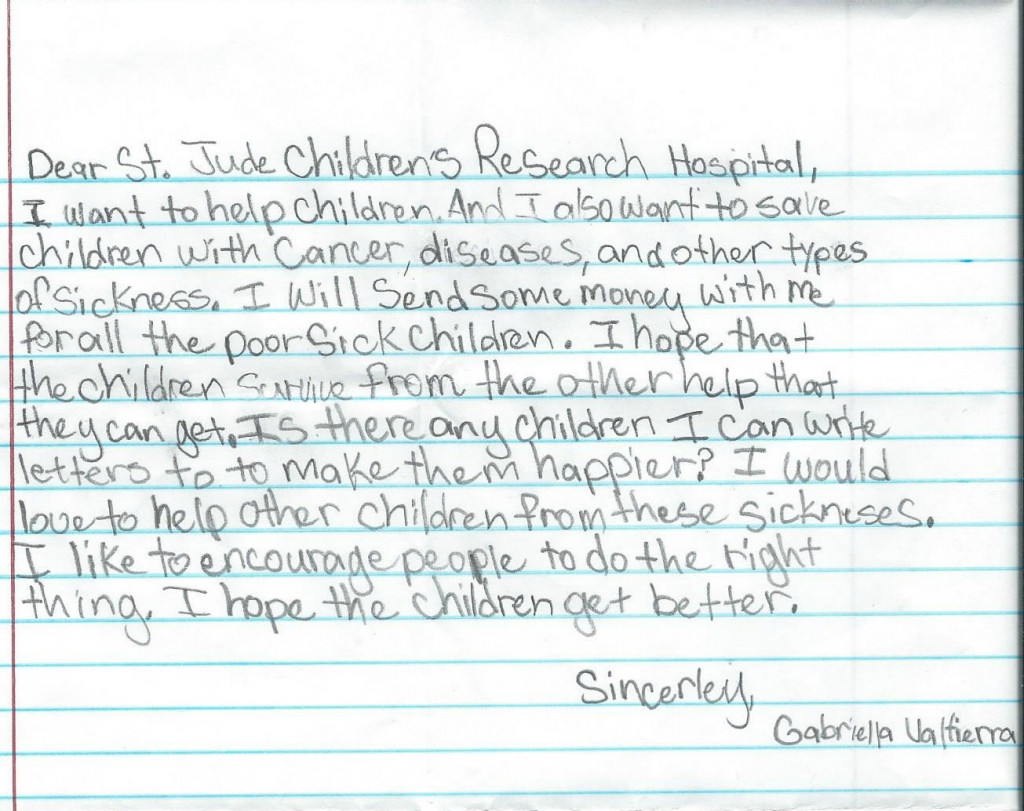 Also inside was a beautiful photo she had drawn and money from her piggy bank.

I am proud of my daughter for her thoughtfulness and I am grateful to have raised a little person with a big heart, who desires to help others.

I’ve been too focused on self, on my own problems and no good ever comes from living that way. I think it’s time to snap out of my selfish pity party and follow my daughter’s example.

I plan to add some of my own money and mail the letter tomorrow.

I’m having so many feelings right now and I’m going to take it old school and write through the feelings.

Just three months ago, I had a really good job that I loved very much.  I got a good employee review and felt like I would have that job for a long time!  They valued my work and I had been there since pretty much the beginning. My job was secure and I felt so blessed!  But, it turns out that I was very wrong about everything and didn’t know anything.

I literally fell to the floor in shock when I got that call because what was I going to do? My family depended on my income to pay the bills and buy the food and OH MY GOD MY LIFE WAS OVER. We had just moved into a house that I loved and we were about to pay off our car and finally buy a new car for my husband (he’s driving the same care we bought in 1995)  and so many other things! And then with that one phone call, everything changed. I didn’t know how we were going to survive.

I cried a lot for days. I didn’t sleep much for weeks. I gained 10 pounds from stress eating at 2am.  I was angry, confused, hurt… I was devastated.

Even though I was upset, I tried very hard to conduct myself in a professional matter. I didn’t want to say anything that I would regret or behave in a way that would be detrimental to my future. It wasn’t easy, but I tried to “put on a happy face.”  I was determined to make the best out of a terrible situation. I had to make a conscience decision every day to not let bitterness consume me.

After a few weeks of crying, worrying, just generally being a hot mess of a human being, I began to feel normal again. I began to feel relieved to have more time to spend with my family, to be creative again. I began to feel hopeful about my future!  The lack of money was hard to deal with, but the important things were getting paid and my kids were clothed, fed and still had a roof over their head.  I chose to be thankful for what I had instead of what I lost.

I was moving on and learning to adjust to my new normal.

But something happened today and I suddenly feel a giant cloud of gloom and sadness looming over me.   I’ve tried not to think about the holidays and all of the stress that will come with it because I’m unemployed, but I can’t pretend it’s not going to happen. I know we will be okay, it’s not the end of the world. We will make the best out of the situation. But I also know that there will be moments of suck and well, UGH.

When I posted about losing my job, a very kind and helpful person left the following comment:

You have 2500+ posts in “uncategorized”. And you were managing social media for a company that is supposedly teaching people how to blog?

So helpful! No, seriously. Even though I know the person was kind of being a dick, what they were saying was true.  Working for TheCompanyThatShallNotBeNamed made it almost impossible for me to put any time into this blog.  I was too busy reading and promoting over 3,000 blogs 5 days a week.  That left little time or desire for me to write anything of my own.

Turns out that uncatergorized posts were the least of my worries.  Just after I lost my job, my blog was hacked, infected with malware and a complete disaster. Luckily, my kind, talented, generous, all around awesome friend Joelle offered to help me get things fixed and back online.  A few days later, I had a new blog host and a beautiful new design. I felt inspired to write again, to become part of the blogging community again.

But those uncategorized posts weighed heavy on my mind, so I decided to go through them and fix the archives up a bit. It took me a couple of weeks, but I went through every single post.  It was a trip reading back through the last 12 years of my life.  I cringed, A LOT. Depression isn’t fun and reading back through that time was painful. I’m not very proud of who I was 12 years ago. Many of the posts made me cringe.  But I’m grateful that I was able to go back in time and remember where I’ve been and appreciate how far I’ve come. The stories I’ve written about my children throughout the past 12 years are one of the best things I’ve done in my life. I would have forgotten so many little, but wonderful life moments were it not for this blog.  (Like the time my daughter told me she loved me more than going to the bathroom.  Or the time I made the ugliest cupcakes EVER for Ethan’s class on his birthday.)  It was evident that my children have always been my comfort, my joy and the thing that I love most in life.  I can say that I am proud of the woman, mother that I am now.

Now that this blog has been fixed and things are in order, I feel like I can start over again. I want to write about my life, my kids, my feeeeelings like I used to. I want to build the community back that I once had here with my readers.  I want to be myself again without having to censor myself to protect someone else’s brand.

I can’t remember the last time I felt this inspired. Whether it be writing or photography, I look forward to expressing myself creatively again. 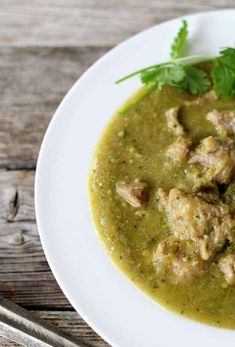 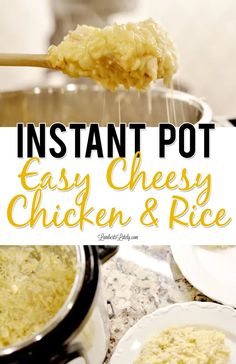