(This post should have went up a week ago, but my blog was hacked (again) and it’s been offline, then online, then offline, and finally online again. There’s a very good chance by the time I post this, it will be offline again. FRUSTRATED.)
Last Thursday I was invited by Coca-Cola to attend Coke Family Night at the American Idol Finalist Party. I immediately called my sister and asked her if she would be my guest, because she is as big of an AI fan as I am.
The party was on the rooftop of The Grove in Los Angeles. When we arrived, I saw the entrance and got a little bit emotional. I have watched American Idol since the beginning. Here we were, at the party where we’d meet Ryan Seacrest and get to hang out with the contestants. I looked at my sister and said “I can’t believe we’re here! This is so awesome!” Then I said “When we get out of the car, please check my clothes to make sure I didn’t leave any tags on.”
We headed towards the entrance of the party filled with excitement. While the lady was checking our IDs, a woman tapped me on the shoulder and whispered in my ear. “Sweetie, there’s a tag hanging off of your jacket.” It was an Old Navy tag for $34.99, size L. I thanked her, ripped that mother effer off and sarcastically thanked my sister for checking like I had asked. A really great way to start the night!
When we entered the tent, we were shown to the area that Coca-Cola had reserved for The Mommy Bloggers . It was kind of cool to have a special spot reserved for us, especially since there was security standing at the entrance making sure only the invited guests could enter. So V.I.P.
Let me break down the highlights of the night.
Meeting Ryan Seacrest.
I love Ryan Seacrest. I’ve loved him since his days as a radio personality on Star 98.7. He’s funny, he’s quick, he’s witty and he’s so pretty/handsome. You can imagine my excitement when we were told he was going to stop by to visit with us. There was just one request and that was not to ask for individual pictures with Ryan because of time issues. Of course, the minute he walked in, people were like “will you take a picture with me?!” This made me nervous because I am a Rule Follower. But Ryan didn’t seem to mind at all. He was friendly and more than happy to pose for a photo with The Ladeeez. I stood off to the side, waiting patiently with my sister. And then, it happened. I was standing face to face with Ryan Seacrest. He looked at me and said “I’m hanging with The Mommy Bloggers.” I looked into his pretty eyes and said “Would you like to hug a mommy blogger?” He laughed and then he hugged me. “Whoa.” He said. “I think I just got to second base with a Mommy blogger!”
After we basically made out with our arms and chest areas, me and my sister took a picture with him. The first picture was awful, so we asked if we could take another one. He was all “absolutely.” Because Ryan loves me so much. 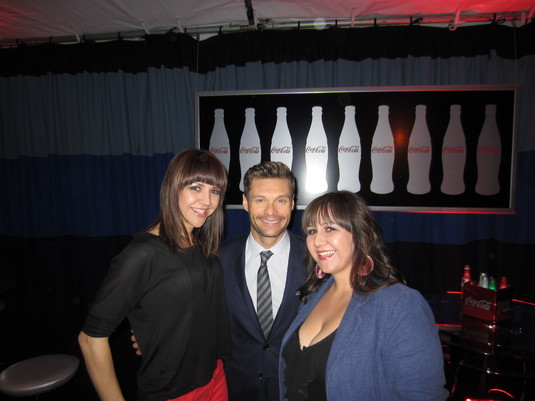 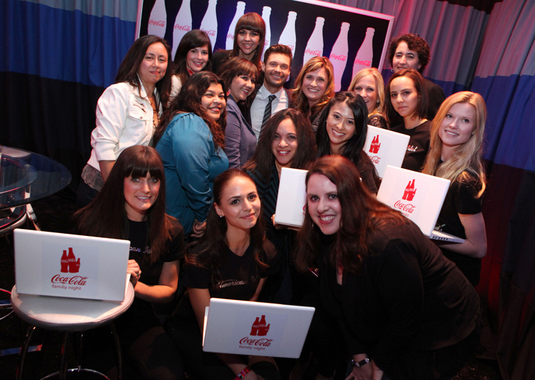 Taking a photo with the finalists on the blue carpet.
This was especially awesome because some of the contestants were very annoyed that they had to pose for a photo with us. They had no idea who we were or why we were there. Some of them *cough* SKYLAR *cough* were rolling their eyes and sighing. Fun times! But that wasn’t the best/worst part! When we were finished with the photo, some woman with a clipboard was all “THIS WAY! THIS WAY!” and so I walked that way and stood there in front of a ton of cameras with my hand on my hip with a big smile on my face. The lady with the clipboard yelled at me. “NO! FINALISTS ONLY! MOVE!” HA HA HAaaaaaawkward. 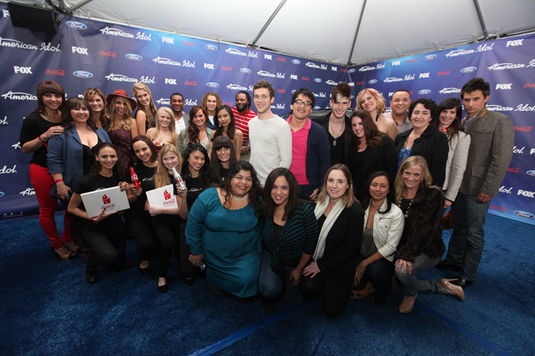 Starting our own dance party
There was a DJ at the party who was playing some really great music. Me and my sister searched for the dance floor, but there was no dance floor. So, we made our own. The servers and bartenders were all like “heck yeah! Wish we could join you!” But all of the people at the party were like “Wish we could, but too many people that we know here.” Oh, LA people. You so insecure. Eventually, two Wonderfully Wonderful guys joined us. Dance Party success achieved! 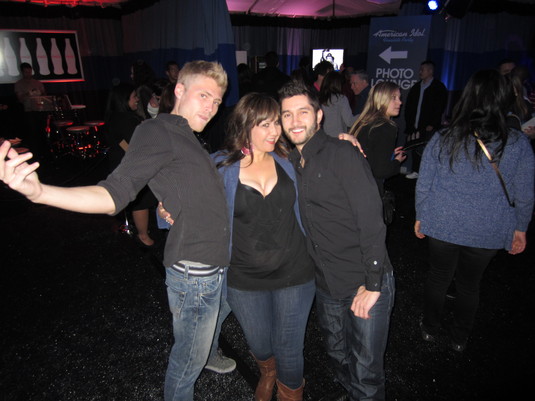 Trying to design a cover as part of Coca-Cola’s Family Night Music Cover Artwork contest.
I am the absolute worst person to ever try to do anything that involves drawing or being creative. (Ask my friends on Draw Something.) But I was excited to give this a try (because the prize is a trip to the American Idol Final!) One of the lovely ladies from Coca-Cola was standing over me as I began to “design” my cover. I can’t even begin to describe how awful it was, so, let me open up paint and try to show you. 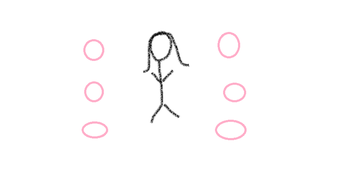 I wanted to keep going, but I shut down emotionally to spare myself any further humiliation. I hit submit, turned to the woman behind me and said “you saw nothing. This never happened.” Oh, how we laughed!
If you’d like to check out the amazing work that others did and vote for your favorite, you can do that here.
Hanging out with Heejun Han, Colton Dixon and Phillip Phillips.
These guys were all so great. If one of them wins and becomes the next Ruben Studdard, I’ll be able to say “One time I goofed around in a photo booth with that guy!” 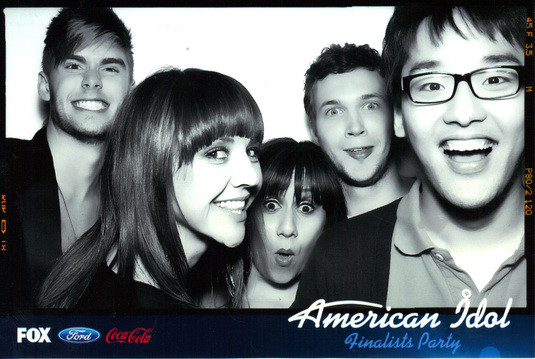 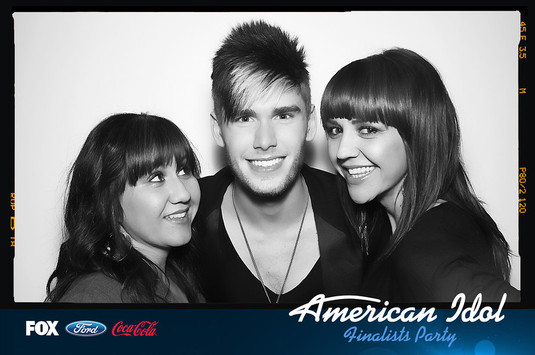 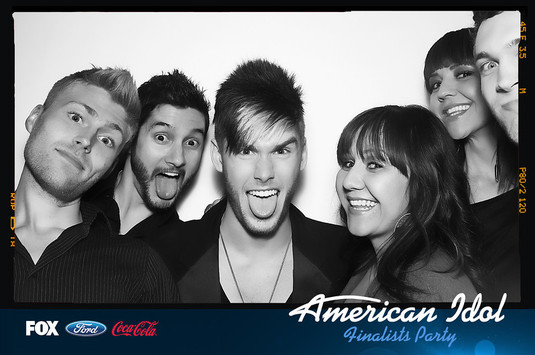 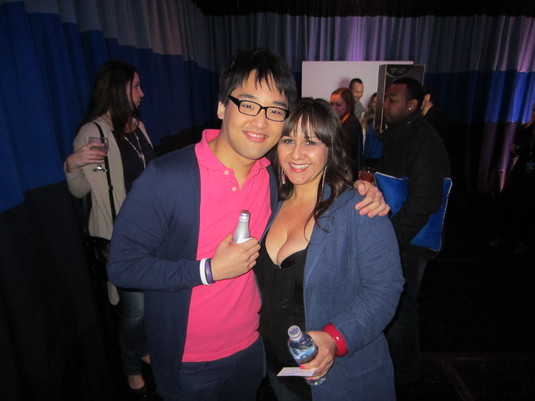 This was one of the funnest experiences of my life. I am so grateful to the people at Coca-Cola for the invitation!
P.S. I’m totally rooting for Heejun if only because he is hilarious and because he told me I don’t look 40.