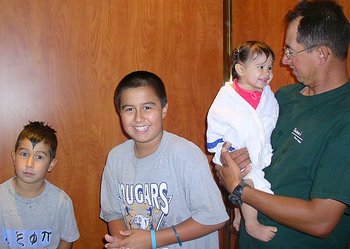 This is not the greatest picture I’ve ever taken. The lighting is bad, there isn’t any beautiful scenery. Most people wouldn’t even give it a second look, I’m sure. And yet to me? It’s probably one of the most beautiful pictures of my family that I’ve ever seen.
I love it. Love. Love. Love. I love it for so many reasons.
The look on Ethan’s face. I’ve seen that look many times. That annoyed, disapproving look. I can only imagine that as I was snapping the shot, he was saying something like “MOM! Are you kidding me? Another picture? Who takes pictures in an elevator anyway? That’s so dumb.” And look at his hair. He has the “Eddie Munster” look going on. He used to do that shit on purpose. He got sick of “fighting” the widows peek and much to my dismay, made a decision to embrace it, to become one with it, to let the peek fall where it may. Oh, how I love that kid.
Andrew. My first baby. This picture was taken before he went “All Pubescent**” on me. He still had the chunky face, the nervous habit of playing with his hands and the “I LOVE SPENDING TIME WITH MY FAMILY SO DANG MUCH” smile on his face. He still loves spending time with his family, he’s just too cool to let it show as freely. You know how teenagers are, all growing hair in places where the sun don’t shine, thinking their too cool for school. Or for bowling with their parents, or for shouting “I love you” back to their mom when she yells it as she drops them off in front of junior high school.
(Funny story about that. It just hit me last night as we were eating dinner that my son, my first baby, will be going to HIGH SCHOOL NEXT YEAR. I shouted out “Oh my God! You’re in EIGHT GRADE, which means, you’re going to be a freshman in high school next year. NO! NO! That can’t be true… how is that possible?!” To which my son rolled his eyes and said “Oh great, here comes the Water Works.” And man, was he right. I couldn’t stop crying and CRAP! I’m crying again now.)
I do believe that the sweetest thing captured in this photo is the love captured between my daughter and her daddy. It reminds me of something that I wrote when she was an infant.

You are looking at the greatest joy in my life right now.
My husband holding our daughter.
The way she smiles at him. The way she grabs his neck and pulls herself close to him. The way she giggles when he looks at her. The way she just loves him and the way he loves her right back times 1000.
There are no words to describe the happiness and fufillment I feel when I watch them together.
We’ll see how true that is when she’s 15 and I tell her “No!” and she’s all “DADDY SAID I COULD… SO SCREW YOU!”
But until that fine day, I will enjoy watching the two of them together, her totally owning him and him loving every minute of it.

Not a day goes by that my husband doesn’t say “She’s the sunshine of my life, Y.” Not a day goes by that she doesn’t squeel for joy when she sees his car coming up the street after a long day of work. Not a day goes by that she doesn’t make him, Mr.I’mTooToughToCry, tear up from her sweetness. They have a special bond and being able to see it so clearly in this picture is the most beautiful thing to me.
Every night, when we lay in bed, my husband thanks me for my children and I thank him for being such an amazing father and sometimes we cry because we know that we are incredibly blessed to have those 3 beautiful human beings in our life.
I never thought when I took that picture on that hot day in September that one day, on a day that I needed it most, it would remind me of what matters the most.
Don’t let the balance in my checking account fool you. I’m rich, people. I’m so filthy rich.
[/The Cheese&trade]
(brought to you by Love Thursday.)
**More on THAT later, because, pooberty is gross.

31 thoughts on “worth a thousand words”