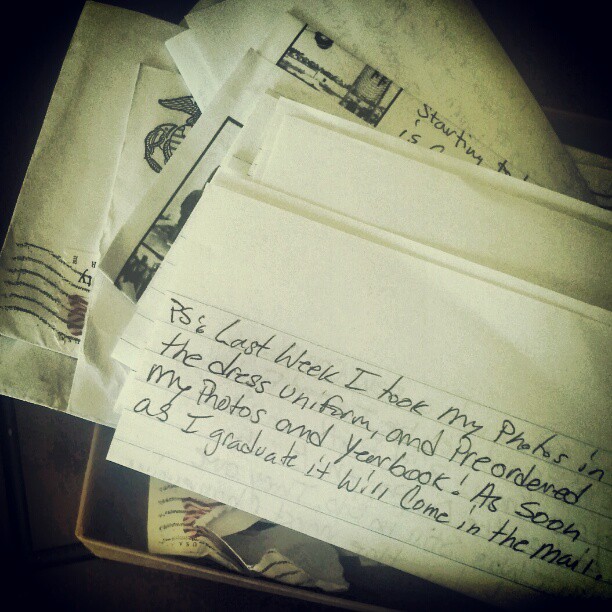 Ever since I received the phone call from my son telling me he was injured and dropped from his company, I’ve been feeling an overwhelming sense of sadness. Not for myself, but for what my son must be going through. I can’t imagine how much it sucks for him to have bonded with the guys in his platoon over the past 5 weeks and then to be held back while they all move on to phase two training.

I have a hard time sleeping at night. I replay his phone call over and over in my head. He sounded so sad, so not himself.

“They’re dropping me from my company and I won’t be moving on to phase two training.”

And there is absolutely nothing I can do about it.

I wrote him a letter and I told him to stay focused on the ultimate goal.

“This is just a minor setback, son. You will achieve your goal, just a bit later than you had planned. STAY STRONG!”

On Tuesday, there were three letters from my son in my mailbox. He’s in MRP (Medical Recovery Platoon) while he waits for his hand to heal and to be placed in his new platoon. The letters were filled with so much emotion. He said when he was training, he didn’t have much time to think, now, he has nothing but time to think.

It tore me up inside to read about the moment he had to say goodbye to his platoon. “The guys were all coming up to me, hugging me, telling me to stay strong. Some of them even gave me things to remember the Kilo Co. by. It sucked.”

On the other hand, it warmed my heart to read that he’s able to keep perspective in regards to his setback. “There are guys who have been here for over a year. It makes me think how lucky I am that I’ll only be here for a little while. It could be worse.”

I’ve written three letters back. These letters are filled with all of the love and encouraging words I could think of.

And now, I ask a favor of you, my dear friends on the internet.

Would you kindly take a minute to leave some words of wisdom and encouragement for my son? I will then copy those words and send them to him while he waits for his hand to heal and to then finally continue with his training.

I would be so grateful and I know my son will be too.

Thank you in advance.

56 thoughts on “Would You Consider Helping a Recruit (and His Mama) Out?”